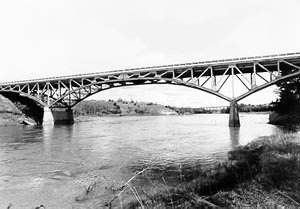 When engineers for the Nebraska Bureau of Roads and Bridge began considering the design of a new bridge to carry U.S. Highways 20/83 over the Niobrara River in 1931, they first considered a 160-foot through truss with deck girder approaches or a 300-foot continuous truss. But they eventually scrapped these designs in favor of a 290-foot arched cantilever deck truss. “Since it was considered that any structure of ordinary appearance would mar the natural beauty of the banks and immediate surroundings the arched cantilever spans were adopted in spite of the slightly greater cost,” highway department engineer Josef Sorkin explained in 1934. Named in honor of Nebraska Governor Charles W. Bryan, the proposed structure consisted of a 145-foot arched span over the river, flanked by symmetrical anchor spans and supported by dumbbell-shaped concrete pedestals. A contract to build the bridge was awarded late in 1931 to the Yant Construction Company of Omaha. Using a steel superstructure fabricated by the Paxton and Vierling Iron Works in Omaha, the contractor completed the bridge the next year. Since its dedication in September 1932, the Bryan Bridge has carried traffic in this lightly trafficked highway, without substantial modification. “Aesthetic treatment of Nebraska bridges is seldom economically justifiable due to the alluvial character of the streams – typically wide and shallow,” Josef Sorkin wrote in 1934. “The comparative cost of substructures is so small that only in very rare instances spans beyond 60 feet in length are acceptable from the point of view of cost. For such limited span lengths the steel deck girder type is most useful. While everything is being done to make such bridges as sightly as possible, spectacular achievements of merit are obviously limited. “With its steep banks and beautiful streambed, the Niobrara River lent itself well to a dramatic structural statement, and the Nebraska highway department took full advantage of this rare opportunity to flex its engineering muscles. Perhaps the most handsome highway bridge in the state, the Bryan Bridge is a singular exercise in highway bridge aesthetics in the state. 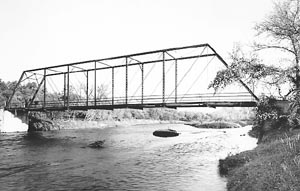 County Road over the Niobrara River 14.7 Miles East of Valentine Cherry County, Nebraska Total Length: 152 ft. Roadway Width: 14 ft. 1-Span, 8-Panel, Pratt Through Truss TYPE: Pin-connected Pratt through truss BUILT: 1899 by the Wrought Iron Bridge Company C001611805 In November 1898 the Cherry County Commissioners received a complaint about the deteriorated condition of the Berry Bridge over the Niobrara River, located about fifteenmiles east of Valentine. They met in special session onthe bridge,condemned it as unsafe, and in Januaryadvertised for competitive bids for a new 150-foot steeltruss on cylinder piers. Submitting no fewer than six different plans, the Wrought Iron Bridge Company of Canton, Ohio, received the contract for $4,580. A WIBCo crew began work on the structure that spring, completing it by early October. The truss functioned in place for over three decades before the countyreplaced it with a heavier span (the Berry State Aid Bridge) in 1921. The 1899 span was then moved to thesite of the old Brewer Bridge, a casualty of flooding five years earlier. Here it has carried infrequent traffic as the oldest of Cherry County’s trusses. 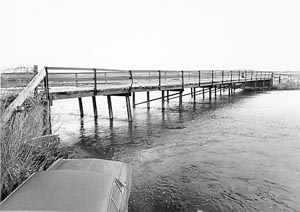 The Cherry County Commissioners received a citizens’ petition in May 1899 for a bridge over the North Loup River in the remote southern part of the county. The commissioners approved the petition, soliciting proposals a year later for this and two other spans. Competitive bids were received in July 1900 from nine bridge builders. The county awarded the construction contract to the Wrought Iron Bridge Company for all three structures for a cost of $3500. Based in Canton, Ohio, the Wrought Iron Bridge Company was one of the two largest vehicular bridge erectors in the country during the late 19th century, rivaling the giant King Iron Bridge Company in its nationwide trade. Though not as active in Nebraska as King, WIBCo did erect spans in the southeast part of the state and in Cherry County. Few WIBCo structures are known to have survived in Nebraska, however. Completed in 1900, the Twin Bridge is among the best preserved of the remaining WIBCo structures, due in large part to its isolated location. It is distinguished as the oldest remaining steel stringer vehicular bridge in the state. Bell Bridge 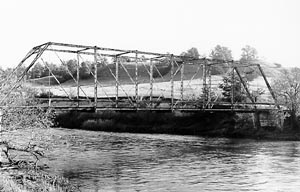 County Road over the Niobrara River 11.9 Miles Northwest of Valentine Cherry County, Nebraska Total Length: 188 ft. Roadway Width: 13.8 ft. 1-Span, 8-Panel, Pratt Through Truss BUILT: 1903 by the Canton Bridge Company C001611605P The Cherry County Commissioners began considering construction of a bridge at the Bell crossing of the Niobrara River when they visited the site in January 1902. Located twelve miles northeast of Valentine, the crossing was situated about midway between the existing Berry and Brewer bridges. In March the county ordered a pin-connected Pratt truss from the Canton Bridge Company of Canton, Ohio. A Canton crew began excavating for the abutments soon thereafter and, using steel rolled in the Cambria mills, completed this 150-foot span by November. Total cost: $5,020. Later called the Allen Bridge, the truss was one of four in the county left intact after a flood in 1916. It has carried vehicular traffic for over 90 years and has retained an excellent degree of physical integrity. As one of the oldest, longest and best-preserved of Cherry County’s remarkable group of through trusses, the Bell Bridge is an excellent example of what was once a mainstay vehicular truss type: the pinned Pratt through truss. 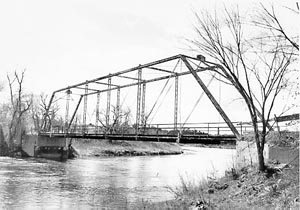 On the afternoon of February 16, 1916, ice on the Niobrara River began to break up as the river’s level quickly rose. The resulting flood rolled downstream, pushing the ice pack in front of it and “virtually eating away the thick ice and destroying the county bridges,” lamented one observer. By the time it passed through the county two days later, the flood had swept away fourteen bridges and damaged or destroyed seven others. Only the Bell Bridge, the Berry Bridge and two others remained passable. In the aftermath, the county commissioners declared an emergency and began replacing the damaged spans. On March 24, they visited the wreckage of the Borman Bridge with a representative of the Canton Bridge Company, which held the county’s annual bridge contract. Two days later the commissioners ordered a 130-foot-long replacement span from Canton. Using steel rolled by Cambria, the Ohio-based company fabricated and erected this pinned Pratt truss within a month, although the county did not pay its $4,230 cost until two years later. 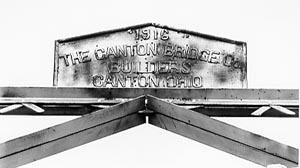 The pin-connected Pratt through truss was the bridge of choice for medium-scale river crossings in Nebraska during the early 20th century, as the Cherry County Commissioners realized in 1916. Virtually all of the replacement spans built that year were medium-span Pratts. Due in part to this natural calamity, the Niobrara River bridges represent the best-preserved group of trusses in the state. The Borman Bridge is significant for its association with the 1916 floodand for its representation of this mainstay structural type. 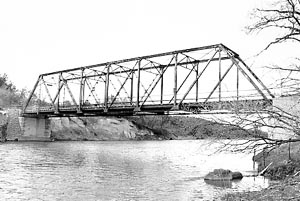 County Road over the Niobrara River 10 Miles Northeast of Valentine Cherry County, Nebraska Total Length: 153 ft. Roadway Width: 15.7 ft. 1-Span, 8-Panel, Pratt Through Truss TYPE: Rigid-connected Pratt through truss BUILT: 1920-21 by the Pioneer Construction Company COE1637705 Built in 1899, the Berry Bridge northeast of Valentine was one of only four spans left intact over the Niobrara River in the wake of the disastrous 1916 flood. After Cherry County rebuilt the last of its wrecked spans in 1917, the commissioners approached the Nebraska Department of Public Works for state aid to replace the existing Berry truss. Aid was approved the following year. In December 1919 the county advertised for bids for a new 20-ton-capacity bridge either a 120-foot or a 150-foot span at this location. The Pioneer Construction Company was the only bidder to submit proposals for both span lengths, and the Omaha-based company was awarded the construction contract for the150-foot span. Despite damaging the truss by a misplaced dynamite blast during erection, Pioneer completed the Berry Bridge by June 1921. The 1899 truss was then moved to the Brewer crossing. The Berry Bridge has had some recent substructural and bank protection work, but the truss remains unaltered. It is historically significant as a regionally important crossing of the Niobrara River and as one of the few state aid trusses remaining in Nebraska.

This information provided by www.fhwa.dot.gov